Her appearance is the same at Lucia's, but without her trademark ponytail. She wears a white dress that has ruffles around the collar, with a black belt fastened in the center. The bottom of her dress is black. As a maid, she wore  a revealing black swimsuit  with a white headband.

On her date with Kotarou she wore a normal Kazamatsuri Academey outfit for girls.

Because of her auto-update system, she gains Lucia's feelings and memories, so her personality is similar if not the same as Lucia's.

The story in Harvest Festa is possibly another parallel dimension created by the Moon Kagari.

Lucia's Route (Harvest Festa): After Kotarou and Lucia finish their date in the original Rewrite's scenario, the get a call from Touka who informs them about the existense of a clone of Lucia. The clone wakes up to see Lucia and Kotarou starring at her, but she is not able to move around that much or speak. Lucia gives her the name Akari Konohana and considers her her younger sister. Day-by-day, Akari is visited by her sister and Lucia and she begans to learn at an incredebly fast rate due to her 'auto-update' system. Because of this she begins to think that she actually is Lucia and begins to fall in love with Kotarou to the point where she kisses him and decides to compete with Lucia for his affection.  Akari moves out and begins living on her own; Kotarou and Lucia throw her a party but begin arguing when Lucia brings up the topic of how Kotarou made her wear a maid outdit from 'Doki Doki Maid Party'. (Lucia and Akari partially dress up as maids and give Kotarou a bath). When the higher-ups in Guardian become concerned that Akari is trying to steal Lucia's identity; they give her the choice of turning off her auto-update function or living as Lucia in another city. Akari chooses to move away to France, before she leaves, Kotarou goes on a date with to the shopping mall (As instructed by Lucia). Akari asks Kotarou to leave an 'everlasting mark on her body' by biting her hand and also to give her his cell-phone as a going-away-gift. As she leaves the city, she and the people transporting her are ambushed by Brenda and her crew and she is captured. It is revealed that Brenda let Akari be captured by Guardian so that she could take the date stored in Akari's 'auto-update' system and use it against them. Lucia, Kotarou, Touka, and Shizuru managed to track her location through the GPS in Kotarou's cell-phone that Akari has. Kotarou corners Brenda and attempts to kill her with his aurora blades but is caught off guard by Shizuru who stops him because their orders are to arrest-not kill Brenda. (He only manages to graze her cheek due to Shizuru interfering). Brenda is arrested and transported to France; though she goes away while laughing, her skin turns purple and she dies from being injected by Lucia's poison. (Lucia's body produces a deadly poison that can be injected through simple touch; the poison has no effect on Kotarou due to him rewriting his body to accept her poison and so it just flows normally through his blood stream. Since Kotarou's aurora is his blood, it transfered Lucia's poison to Brenda when he grazed her). Akari thanks Lucia and Kotarou for saving her then leaves to start her new life while Lucia continues her life with Kotarou. 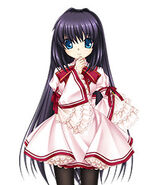 Akari as she appears in her date with Kotarou.

Akari and Lucia, respectively, as seen in the TV Anime's 2nd Season PV. 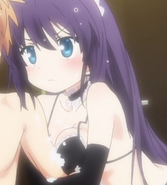 Akari's cameo in the TV Anime's 2nd Season
Add a photo to this gallery
Retrieved from "https://rewrite.fandom.com/wiki/Akari_Konohana?oldid=8384"
Community content is available under CC-BY-SA unless otherwise noted.