Haruhiko Yoshino a self-styled "outlaw" and a loner classmate of Kotarou's. The other students keep their distance from him, but Kotarou finds his gag-like speech patterns hilarious. Yoshino can't stand Kotarou's flippant and manipulative behavior, wishing to settle the score by fighting.

Yoshino is so bent on fighting Kotarou is because he harbors feelings for Kotori and wants to beat him in front of her. His feelings for Kotori are so strong, that in her route of Rewrite, he becomes enraged by Kotarou's flippant attitude of throwing a goodbye party after she seemingly transfers from their school. His rage extends to the point where he hit Kotarou and decides to ignore him until the end of the route. Despite being a self-proclaimed gangster, Yoshino is very kind-hearted and has a strong sense of justice. As revealed by a man on the street, Yoshino made the slums of the city a much safer place by getting rid of all the bad gangsters. When he and Kotarou fell into a hole with a ladder that could only be used once he decided not to abandon Kotarou. He seemingly cannot get angry at Shizuru and is afraid of Lucia.

Kotarou's Past: The first time that Yoshino actually meets Kotarou is when he has his wallet stolen by three bullies on the street. Kotarou asks the bullies to give Yoshino back his wallet but a fight soon starts; Kotarou easily dispatches the bullies and gives Yoshino back his wallet. Yoshino is deeply impressed by Kotarou's seemingly gangster-like lifestyle and asks him questions on how he can become a gangster. He is enraged when Kotarou explains his normal life to him and runs off, but is still grateful to him. (Over the years, Yoshino grows up and befriends Kotarou and Kotori, while not realizing that Kotarou is the same person that helped him get his wallet back and inspired him to become a gangster). Around that time, Yoshino had established the Wolf Pack and became it's leader.

Kotori's Route: After the events in the forest; Kotori disappears from school without a trace. Yoshino consults Kotarou about her disappearance, and even though he learns that Kotarou knows nothing he is still angry and begins to avoid interacting with him. Later, their class teacher announces that Kotori has transferred to a different school (She didn't actually). Though Kotarou knows the true situation with Kotori, he acts cheerful and decides that he and everyone should throw a going away party for her. Yoshino becomes angry; he shoves Kotarou against a wall; disregarding the words of the teacher, he lectures Kotarou about how he treats other people, at the end of the conversation he punches him with all of his strength, stating that he will never acknowledge Kotarou's existence again. Yoshino runs into Kotarou on the street when he's talking to a member of his 'Wolf Pack'. Yoshino completely ignores Kotarou until Kotarou picks a fight with him. Yoshino is outmatched by Kotarou's sheer strength and acknowledges his victory. He learns from Kotarou that Kotori is safe and asks him why he had refused to use his full strength in their previous fights. Kotarou realizes Yoshino's love for Kotori, but decides not to give her up; Yoshino then acknowledges that Kotarou is better at protecting her and tells him to make her happy. Later, Yoshino attends the Harvest Festival and sees Kotori struggling to carry a blood stained Kotarou in her shoulders. He frequently visits Kotarou while he's in the hospital.

Chihaya's Route: Yoshino appears before Kotarou and Chihaya where he complains to Kotarou about how he is spending so much time with Chihaya while Kotori has vanished from school, after voicing his complaints he leaves and heads to the school gymnasium. When Midou starts a fire in the gym and locks everyone inside, Yoshino forces the door open and saves most of the students. When Kotarou and Chihaya decide to stay inside Yoshino gets swept out in the wave of students running out. On the outside he takes control of a vehicle and attempts to crash through the gymnasium's doors to save them. Shizuru appears and blocks his path, she makes a gesture for him to back up further as to get more leverage; he crashes through the door to find Kotarou unconscious Later in the route as Kotarou and Chihaya are setting out to save Sakuya who's been kidnapped by Akane, Yoshino appears and asks them if he can help them out. Kotarou tells him that the current situation is too dangerous for him to help them, Yoshino agrees to let them go but makes a promise with Kotarou that when he comes back; he'll punch him. At the end of the route, Yoshino is seen in the Occult Club room. 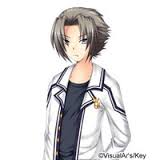 
Retrieved from "https://rewrite.fandom.com/wiki/Haruhiko_Yoshino?oldid=6902"
Community content is available under CC-BY-SA unless otherwise noted.