Jasmine (ヤスミン Yasumin), also transliterated as Yasmin[1], is a supporting character in Rewrite's Terra Route, and one of the children that Kotarou and Luis befriended in the country where they participated in war.

In the visual novel, Jasmine is only seen in the ending sequence of Rewrite, where she stands with the Rogue Summoners. She has long brown hair in two braids. The anime shows her to have round olive eyes.

She is first seen in the anime wearing a white long-sleeved shirt and a long green skirt. She is notably barefoot.

Two years after, she wears a white, long sleeved shirt, a green vest, and a black skirt. This is the only outfit she is seen wearing in the visual novel. The anime shows her vest to have a yellow trim and the hem of her skirt to be ruffled. She also wears a Mary Janes shoes.

Jasmine is a strong-willed girl who cares tremendously for other people. She is liberated by Kotarou from being used as summoners for a terrorist organization. Because of this, she happily assists Kotarou in his mission to make the world better by providing Intel and a media outlet through her new orphanage.

She has a strong interest in computers, and wanted to be a programmer so they could escape poverty.

Jasmine briefly appeared during Midou's flashback. Living in a war-torn community, she was a childhood friend of the three Rogue Summoners. She was gunned down presumably by Guardian agents, and it was an event witnessed by the three. These led to Midou's attitude towards people.

She was among the children used by a group of summoners along with many other children to fuel the life of a familiar called a djinn.

Kotarou and his partner, Luis break into a drug factory owned by summoners; without thinking Luis fires on the children as he enters the room, killing several of them and wounding two more. Jasmine explains to Kotarou that they are all summoners used to fuel the djinn, Kotarou decides to rescue the kids and get them away from the factory, not before the two wounded kids are shot and killed by Kotarou's team captain while Jasmine and the unwounded children hide in the closet.

Jasmine leaves the factory with kotarou and Luis, on the way they learn that missiles are being fired in the air; three, each with potential to set the entire field around them on fire. Jasmine runs away with Kotarou as Luis stays behind to shoot down the missiles with his spears. A few years later Jasmine begins to help Kotarou gather information on Gaia and Guardian while maintaining an orphanage full of summoner and superpowered children. As the Terra Route finalizes, Kotarou orders Jasmine to take the children and flee somewhere safe and to destroy all her connections to him. After the route ends, Jasmine writes a diary on her phone speaking of a man (Kotarou) who did everything he could to save the world.

Jasmine along with Tenma, Tenjin and Midou. 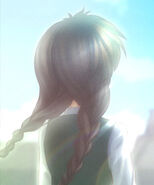 Jasmine showing her fondness for computers

Community content is available under CC-BY-SA unless otherwise noted.
Advertisement