Noe has spiky red hair, amber colored eyes, and wears a dress suit and a green bandana. His casual clothes consist of a white shirt and black pants.

Not much is known is known about Noe's personality, but in battle he is seen smiling.

He first appears with the rest of the Knights in the forest where they save Kotarou from being killed by a dinosaur-familiar.

He attends Lucia's going away party but where he is seen dancing. 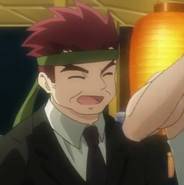 Retrieved from "https://rewrite.fandom.com/wiki/Marcus_Noe?oldid=8557"
Community content is available under CC-BY-SA unless otherwise noted.