Sakuya Ohtori (鳳 咲夜 Ōtori Sakuya) is a secondary character in Rewrite. He's introduced as Chihaya Ohtori's butler, and is usually at odds with Kotarou Tennouji.

Sakuya looks after Chihaya as a guardian or big brother would, and despite having the same family name, is not directly related to her. While generally a social and kind person, he is rather cold only towards Kotarou. Sakuya enjoys making fun of him by making up nicknames for him. He enjoys doing things for others, whether it is small, like baking things for them or pouring tea, or big, like protecting someone with his life.

Sakuya has red eyes and his hair is black and short with a longer strand tied in a ponytail. He's described by Kotarou himself as a rather good-looking guy.

At school, Sakuya wears the male uniform and glasses. Meanwhile, when at the Ohtori residence, he usually wears a black butler outfit.

In battle, he removes his glasses and wears a black over-coat, black gloves, and a chain dangling from his neck. His neck is also wrapped in white bandages.

Sakuya is first introduced in October 16th, when Kotarou finds him reading in the Occult Club room. Ever since the moment he sees him, Sakuya acts pretty cold towards Kotarou, making them both be at odds. Later on, Chihaya tries to introduce him as her big brother, but she messes up and gives it away that they're not actually blood related. Sakuya then introduces himself as Chihaya's "knight", having Kotarou draw the conclussion that he means he's Chihaya's butler.

Sakuya often helps out with Occult Club matters, much to Akane's dismay. Whenever he pops by the club room, he serves tea and baked goods to the girls (but not to Kotarou).

Sakuya is actually a familiar, regarded by those in "Gaia" and "Guardian" as the strongest familiar in the world. In his past life, Sakuya was someone who devoted his life to protecting his master, Minata. Sakuya failed to protect his master and as salvation was taking place, he rewrote his own body into becoming a tree. Years later, Chihaya's dad makes a familiar out of one of Sakuya's branches, and gives it to Chihaya.

Time passes, and Guardian attacks Chihaya's village, since it's a place where summoners research familiars, and where there's a functioning power spot, allowing them to create familiars to their heart's content. In an attempt to escape the massacre, Chihaya flees to the forest, but is found out by a member of Guardian and attacked. She uses her familiar to escape, but she can only distract the Guardian member for a little while. Chihaya ends up in front of the large cherry tree that is Sakuya, and asks for protection. Then, Sakuya materializes himself in his human form, though he is now a familiar, and makes a contract with Chihaya. Sakuya then kills the man chasing her, and she passes out. By the time she wakes up at one of Gaia's facilities, he makes sure to seal that painful memory deep in her mind.

After the events in the forest Kotarou is invited to stay with him and Chihaya for protection. There, Sakuya notices how Kotarou has been using his rewrite ability, so he offers to train him so that he can use it more effectively.

As the route goes on, Sakuya notices Kotarou getting closer to Chihaya, and his willingness to protect her no matter what, so he eases up a little bit on him. He even mentions that having Kotarou around makes it seem like their "family" grew larger.

When Kotarou is badly beaten by Tenma and his familiar Krivoy Rog, Sakuya appears and slices it in half. He doesn't, however, kill Krivoy Rog or Tenma. There, Kotarou learns for the first time about Sakuya being a familiar.

After that, the three of them resume their lives at the Ohtori residence, up until Midou reappears, threatening to kill innocent people. Later that day, Sakuya decides to begin searching for him, but Kotarou says that that's something he has to do himself.

On the day of the Harvest Festival, Kotarou and Chihaya go to school and end up fighting Midou. Meanwhile, Sakuya, along with Pani & Gil, go looking for the other rogue summoner, Tenjin, and find him along with his flying familiar Kilimanjaro. Though Sakuya could easily dispatch Tenma and his familar, Kilimanjaro's flying ability keeps him out of their reach. Gil flies up to distract the familiar while Sakuya deals the finishing blow. Sakuya manages to capture Tenjin alive.

Since Midou burned down most of the gym, the Harvest Festival is cancelled for the year. However, Sakuya suddenly announces that some stalls have gathered voluntarily in the slums of Kazamatsuri. Thus, the three of them go over to relax for a few hours. However, Sakuya leaves after a while, and as Kotarou suggests he might've gone home already, Chihaya goes to check if that's the case. After checking in with Chihaya and learning that Sakuya isn't at the Ohtori residence, Kotarou bumps into Touka Nishikujou, who would've killed had Sakuya not intervened.

The next day, Sakuya, Kotarou and Chihaya go over to the Martel group's headquarters to get orders from Akane, but they find her in a less than optimal state. Akane tells them to take away the empty shell that is now the Key, and that she doesn't need it anymore. When they come back home, they get a call from Shizuru, saying that Guardian demands that they hand over the Key. Even though they know it's a trap, they agree to bring over the Key to the designated place. As Touka and Shizuru attack them, Chihaya summons Sakuya. However, Shizuru is able to release a certain toxin from her body that paralizes familiars, so Sakuya is frozen in place.

Sakuya and Kotarou both urge Chihaya to run but she does not listen. Drowning in despair, Kotarou rewrites his own mind in order to protect Chihaya. However, in the process, he stops being able to control himself. Sakuya, Shizuru, and Touka team up to stop Kotarou from destroying everything, but are over-whelmed by his power. Chihaya gives Sakuya the power she obtained through her contract with him, making him grow strong enough to stop Kotarou. Then, Sakuya rewrites Kotarou's mind with his own will, bringing him back to normal while also showing him his own past.

Sakuya and Chihaya quickly remake their contract after the fight, but he still falls unconscious, and his wounds won't heal. Everyone agrees that it's Akane's doing, so they decide to go talk to her, but instead she attacks them. However, Sakuya summons himself, even though that might make him disappear, and fights the whole herd of familiars. After he falls, Akane ends up kidnapping him, so that she could repurpose him into a "vessel".

Chihaya and Kotarou make Akane return to her original self, but then Sakuya turns into a giant familiar capable of destroying the world. With assistance from Shizuru, Touka, Esaka, and Midou's familiar, Fuego, Kotarou manages to fly up to the giant familiar and wake Sakuya up by hitting him. The familiar falls apart and Sakuya is on the verge of disappearing, but before vanishing, he and Kotarou spar using their sword and then their fists.

At the end of Chihaya's route, she's staring at the withered tree, trying to bring Sakuya back. Everyone says she can't do it, but at the very end, the tree blooms again.

Sakuya is mentioned in Lucia's Route, but not exactly seen. The bandages Chihaya wears in order to resist Lucia's poison are his doing.

When Gaia attacks Guardian's base, Kotarou and Shizuru find Sakuya holding Sougen Esaka by his neck. Sakuya mentions that he has no intention of killing him, merely to incapacitate him for the time being. Kotarou prompts Sakuya to leave the base, but he replies that he won't, because he will only obey Chihaya's orders. Shizuru attacks Sakuya, resulting in a heated battle between them. However, they're stopped by Chihaya, who suddenly appears. She states that she knew this kind of situation could present itself, and that she had been thinking that if it did, she would leave Gaia. She then turns around and leaves with Sakuya.

After the Key emits salvation, Sakuya is seen with Chihaya. Chihaya thanks him for all that he's done, but he simply says that he believes that there was more he could have done. Chihaya disappears but it is not actually seen that Sakuya disappears.

In the battle to protect Kagari from the familiars sent by Sakura Kashima, Sakuya appears on the moon and replaces the 'fake' Sakuya, who was destroying the familiars surrounding Kagari. After stating that he is more powerful that ever, having arrived with the combined knowledge of every being that was ever him, Chihaya orders him to destroy the familiars that attack from the sky. As Chihaya and Shizuru disappear, Sakuya begins fighting familiars with Kotarou, but suddenly countless familiars fall from the sky towards Kagari. Sakuya transforms into his final familiar form and begins destroying them, but also getting caught in their poisonous fluids; eventually he reverts back into a Sakura Tree and disappears from the world.

Sakuya appears before Kotarou as he's going to see Kagari. Sakuya tries to persuade him not to go, but Kotarou asks him if he's ever felt the same way about someone the way Kotarou feels about Kagari. Realizing that Kotarou is determined, Sakuya high-fives Kotarou and states that he can now finally disappear.

"Kotarou is far more human than any of you!" Sakuya says to Touka after Kotarou rewrites his mind and attacks everyone.

"Now... Let the flowers bloom one last time!" Sakuya says after he arrives in Kagiri's world in Chihaya's after route. 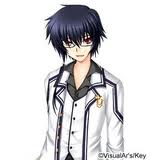 Sakuya protecting Kotarou and Chihaya from a falling flowerpot. 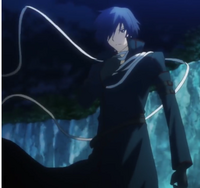 Retrieved from "https://rewrite.fandom.com/wiki/Sakuya_Ohtori?oldid=9523"
Community content is available under CC-BY-SA unless otherwise noted.