Tenjin (テンジン) is an antagonist of Rewrite. He, along with Midou and Tenma, is part of a group of Rogue Summoners.

In the visual novel, Tenjin has only been seen wearing his summoner robe, and not much is known on his appearance other than his baldness.

In the anime, other than those described above, he also wears three pairs of earrings.

He is described to be the most ordinary of the three rogue summoners. It can be said that he cares a lot for Tenma and Midou. He fought Sakuya in the forest in an attempt to avenge Tenma's death.

Tenjin only appears in Chihaya's Route and at the end of the Terra Route.

Tenjin appears in the forest alongside Midou and Tenma surrounded by hound-familiars. As the group becomes aware of Kotarou's presence, they leave the forest. However Midou leaves an empowered hound behind to fight Kotarou. After Tenma is killed by Sakuya, Tenjin attacks Sakuya, Pani and Gil in the forest using his familiar, Kilimanjaro. After he and his familiar are defeated he is said to have been taken into custody by Gaia.

As Kotarou and the heroines of Rewrite journey up to the moon, Tenjin is seen in the ending sequence along with Midou, Tenma, and Jasmine.

Tenjin, along with Midou and Tenma.

Tenjin, along with Tenma, Midou and Jasmine. 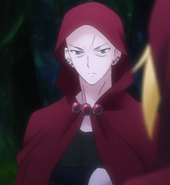 Tenjin in the anime

Midou, Tenma and Tenjin as children
Add a photo to this gallery
Retrieved from "https://rewrite.fandom.com/wiki/Tenjin?oldid=8729"
Community content is available under CC-BY-SA unless otherwise noted.