Touka appears to be a beautiful woman in her mid-twenties with long lavender hair that is tied part of it in a bun, but leaves the rest to dangle freely and gradient eyes (violet at the top morphing into grey at the bottom) that she mostly leaves closed through the whole visual novel, but she opens them whenever she's serious.

She wears purple earrings, a black dress and a skirt covered by a beige jacket. She also wears a black panty-hose and black heels.

When she was younger, Touka wears her hair very much in a similar fashion to how she does usually, but much shorter.

Touka is a lighthearted and easygoing young woman who is quite popular among the student body, particularly with first years. Touka shows herself as a calm and gentle teacher, if sometimes a little childish when she's around Shizuru Nakatsu. Like with her, Touka is in good terms with Lucia Konohana.

The three of them get along particularly well because they're all at the school for an undercover mission from Guardian, a society they're all members of.

During the Terra Route, we are able to see that she used to be quite cold, a kind of personality that she still lets slip here and there whenever she gets serious in the other routes. However, she adopted her current seemingly air-headed personality around the same time when she started being a fake teacher. It seems like she really enjoys being a teacher, pretense aside, and she even mentions the possibility of becoming one for real at some point.

A younger Touka is introduced into Guardian as a recruit, and her first test results rank her 40 out of 42, becoming a member of Team Imamiya along with Arata Imamiya, Kotarou Tennouji and Nagai. While in her early years of being in Guardian, she develops a love for teaching young recruits and taking some of them under her wing. This shows particularly in the way in which she looks after Shizuru. Later on, she starts an undercover mission with Shizuru Nakatsu and Lucia Konohana, with herself as a teacher and both of them as students, in order to infiltrate the Kazamatsuri Academy.

Touka meets Kotarou Tennouji again at Kazamatsuri Academy, but since his accident with Kagari happened, he can't recall having met her. Touka and Shizuru Nakatsu play around for a while before both of them leave. However, before leaving, Touka turns around and asks for Kotarou to be nice to Shizuru.

Later on, Kotarou goes out to eat, only to find out that Touka keeps a puppy in school premises. Touka asks him to not tell anyone, and he agrees to it.

The next time Kotarou Tennouji encounters Touka is when Shizuru Nakatsu and him are eating out in the courtyard. Touka enters the picture to "break up their fight" (even though they weren't really fighting), and then resumes her landscape painting. She explains that the art club needed some, so she's helping out. However, this only makes Kotarou remember that he still doesn't know what Touka teaches at school. Lamenting that Shizuru is not helping her with her art samples this time, Touka manages to rope both Kotarou and her into helping her out.

As they walk the corridors, Kotarou understands just how popular a teacher Touka is, since many students keep asking her for help with their studies. She then uses this whole thing as an excuse to ask about Kotarou and Shizuru's feelings, to the point of asking them if they're "lovey-dovey".

When Shizuru finally asks Kotarou to go with her to see her parent's house, Touka teases him about it, but it doesn't have much of an effect on Kotarou. When he asks her how she knew they were having a date that day, Touka simply says that she's the one who will drive them there (much to Shizuru's dismay), since she has a license.

On the way back from Shizuru's parents' place, Touka explains a more about Shizuru's mindset and powers to Kotarou, along with her wish.

The next time Kotarou sees her is after he wakes up and learns that Shizuru is in a coma. Touka is devastated and asks Kotarou if he knows of some way to have her wake up, but he doesn't really know anything since his memories of the past month are gone. After telling him that Shizuru's current state is not his fault, Touka proceeds to tell Kotarou about her current status, since Shizuru's body is weak and keeps getting weaker by the second.

In a flashback, Kotarou begins to remember how he and Gennady Eduardovich Kwachieev got attacked by familiars. In the middle of all that, Touka appears as backup. After getting away, she explains how Shizuru, Lucia and her were doing undercover work at the school in order to check out the compressed space beneath the school. She also asks Kotarou about his powers and about whether or not he's an actual student.

Since they're already talking about things like these, Touka asks Kotarou whether he'd want to join Guardian or not. Kotarou's response is that he would if that would imply him being able to be with Shizuru. With that in mind, Touka recommends that he joins any of the non-fighting sections of Guardian, and talks about how much she dotes on Shizuru and wants to see her lead a normal, happy life. To this, Kotarou just tells her that she should work as a real teacher.

When Kotarou tries to strengthen himself to spite Imamiya, the skin on his left arm starts hardening. This earns him a lecture from Touka, who tells him that his power could potentially shorten his lifespan or turn him into something non-human.

Later on, Shizuru wakes up, and Touka is visibly relieved. Both Kotarou and her talk about happiness, and the importance of the fact that sometimes you have to sacrifice someone else's happiness in order to achieve your own.

After the fight against Sakuya and Chihaya, the Key is located, so Touka proposes that a team consisting of her, Shizuru and Kotarou is dispatched, since Shizuru can stand her ground and Kotarou is an "Eye". In this battle, Touka sacrifices her own life to destroy the shell of the Key, but sadly, that doesn't stop salvation from happening.

Touka tries to help out Kotarou and Lucia in understanding the mystery of the copy machine when they're stuck, although she also has her own reasons to do so (namely, making a copy of a magazine she "borrowed" from another teacher). However, it's not until Lucia and Kotarou are at the Santa Brosia orphanage that Touka truly shows herself as a member of Guardian.

After taking them out of there and testing Kotarou, she finds out that he's immune to Lucia's poison, what makes her extremely happy. She then proceeds to ask him to keep the incident at the orphanage and the existence of their society under wraps, and Kotarou agrees. However, he does demand that a few "requests" of his be obeyed, and, since they're all mostly related to having Lucia cook or do things that she considers harmless, Touka jokingly agrees.

While Lucia, Kotarou and Shizuru have fun, Touka receives word that her suspicions of the Key being in Kazamatsuri are almost certain. However, the problem lies in that, since Gaia has been spreading rumors of different sightings worldwide, other nations of the world won't help her out when it comes to killing it.

Shizuru suddenly passes out as Lucia and Kotarou are in their date, and Touka informs them that, apparently, Shizuru's immunity to Lucia's poison might not be as good as they thought in the first place. With this in mind, Touka sends Lucia to a special facility to make new suppressants for her poison, and Kotarou to get tested just in case.

Since Lucia didn't take her phone charger with her to the new facility, Kotarou cannot send messages to her, so he tries to go and retrieve it. However, the fact is, Gaia has a list of Guardian employees, and has been killing them off, so when Touka gets wind of the fact that Kotarou is going to Lucia's house, she rushes over there, saving his life. She promises to get her the charger, and she muses about the fact that Lucia might never leave the isolation room she's at.

Touka learns about Lucia escaping her facility along with an ex-Guardian scientist: Brenda McFarden. Since Brenda is also one of the people who modified Lucia's body in order to make it how it is, Touka immediately fears that they're planning on putting her in stasis or something worse. Finally, after some phone calls with some members of the Vatican, she realizes where Brenda and company might be taking Lucia.

On a helicopter, they bust the base where Brenda was located, and then arrives to the mall where Lucia and Kotarou were fighting, taking away Shizuru, Lucia, Kotarou and maybe Chihaya, although this is not confirmed.

In the Terra route, we find a much younger Touka who has just joined Guardian. She's in Team Imamiya along with Kotarou, Arata and Nagai. She seems to be cold and calculating, and, since she was ranked 40 out of 42 recruits, both her and Arata look for any possible opportunity to stand out. Along the route, she starts getting along a little better with Arata and Kotarou, and she even introduces them to the newest recruit she has found: Shizuru Nakatsu.

Near the end of the route, Kotarou entrusts her with taking care of the younger version of Kotori Kanbe. She then raises Shizuru and Kotori along with Chihaya, Lucia and Akane, whom she found later on. 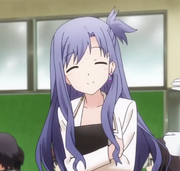 Touka's eyes when they are open 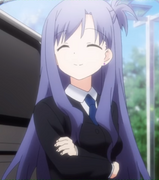 A younger Touka during the days of her Guardian training

Retrieved from "https://rewrite.fandom.com/wiki/Touka_Nishikujou?oldid=9580"
Community content is available under CC-BY-SA unless otherwise noted.