Tsukuno is a burgundy haired woman with green eyes in her mid-20s.

Tsukuno is very reserved and mostly just follows Akane's orders, even if it is something like stealing Kotarou Tennouji's hard-earned paycheck. However, a very kind streak of hers is revealed in Akane's route, where we're shown that she actually also takes care of Akane's protégé, Shimako.

We're shown a different side of her during the Terra route, albeit under the name of Nagai, where she shows how much she lacks confidence and how depressed she is, to the point where she doesn't mind laying her own life to destroy the world.

She appears again as the Occult Club members are investigating the rumor of a tsuchinoko. Apparently, Tsukuno's hobby is to hunt UMAs, so she made a fake tsuchinoko to catch the real one.

She also makes an appearance when Kotarou receives his first paycheck. At Akane's command, she takes it away from him and starts running. When Kotarou catches up to him, she screams for help, and Kotarou ends up going to the police station. However, she bails him out and gives him back his money. She also appears at the school. When Kotarou asks her who she really is, she replies that she's Akane's secretary.

During Akane's Route, Tsukuno can often be seen taking care of Shimako. She also participates in Akane's imitation of salvation, losing her life as she sings along with the choir.

Her real name is Nagai (長居), who participated in Guardian's training at the same time as Kotarou, Arata Imamiya and Touka Nishikujou. As she's ranked 41 out of 42 recruits, she doesn't have much confidence in herself, and the pressure to be better than the rest ends up being too much for her. She leaves Guardian, and her powers wane.

It's normal for Nagai, who is depressed and thinks that her life has no meaning, to end up gravitating to Gaia instead. There, under the name Tsukuno, she starts working for the Gaia-sponsored orphanage where Akane lived during her early years. She's also seen attending to Martel's choir practice. 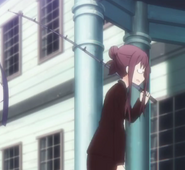 cameo appearance in the opening theme of the anime 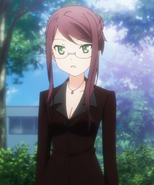 Nagai displaying her superhuman ability
Add a photo to this gallery
Retrieved from "https://rewrite.fandom.com/wiki/Tsukuno?oldid=8612"
Community content is available under CC-BY-SA unless otherwise noted.